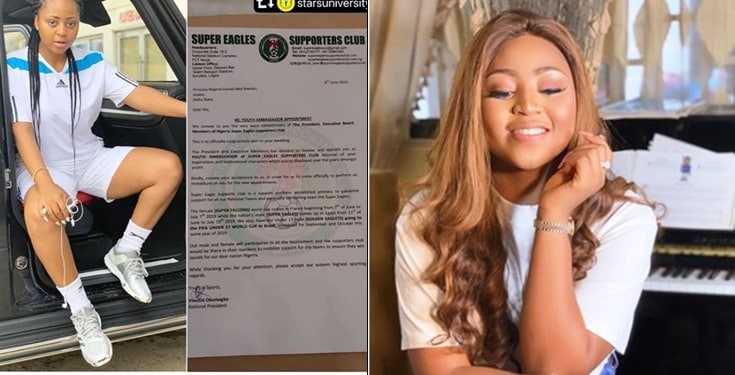 Controversial Nollywood teen actress Regina Daniels, is once again in the news and this time around it has nothing to do with her much talked about marriage to billionaire husband, Ned Nwoko.
Daniels has been appointed as a youth ambassador of the Super Eagles supporters club in consideration of her motivational endeavors and passion shown over the course of the years.
In an official letter signed by the national president of the supporters club, Mr Vincent Okumagba, the supporters club made reference to the screen diva’s recently concluded Children’s Day festival which attracted thousands of people that comprised of kids and youths.
The appointment comes ahead of the commencement of the 2019 edition of the African Cup of Nations (AFCON) tournament which is scheduled to hold in Egypt. Explaining what the role entails, Okumagba pointed out that the supporters club holds the important role of mobilizing and providing strong support for the Super Eagles, Super Falcons, the Flying Eagles, the Golden Eaglets and other national teams.
Reacting to the appointment on his official Instagram page, Ned Nwoko expressed that he is proud of his wife. 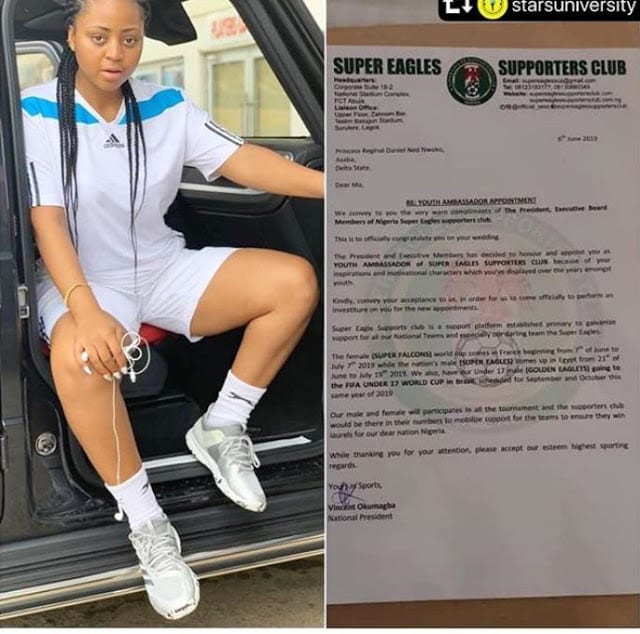 View this post on Instagram
I am Proud Of You. 👑 #repost @starsuniversity ・・・ Princess Regina Daniels Ned Nwoko Appointed Ambassador of Super Eagles Supporters Club Princess Regina Daniels Ned Nwoko has been honoured as Youth Ambassador of the Super Eagles Supporters Club. The appointment, which comes ahead of the commencement of the 2019 edition of the African Cup of Nations (AFCON) Tournament in Egypt, was conveyed through a letter signed by the National President of the supporters club, Mr Vincent Okumagba. According to the letter, Princess Regina Daniels Ned Nwoko was chosen for the prestigious soccer ambassadorial appointment due to her motivational endeavours and passion shown over the years. The supporters club cited one of the endeavours as the recent Regina Daniels Childrens Carnival which was staged in Agbor, Delta state and attracted thousands of people particularly children and youth. Okumagba explained that the Super Eagles Supporters club performs the important role of mobilizing and providing strong support base for the Super Eagles football team, the Super Falcons, the Flying Eagles, the Golden Eaglets and other national football teams of Nigeria. It is noteworthy that Regina’s husband, Prince (Dr) Ned Nwoko, the Senator-elect for Delta North is a veritable pillar of sports in the country. He is also the Chancellor of the proposed Stars University, Delta State, a pioneer tertiary institution that would combine comprehensive sports development and academic pursuits. #educationethusiast #starsuniversity #mountnednwoko #princenednwokofoundation #pnnf #nednwoko
A post shared by HON PRINCE NED NWOKO (@officialprincened) on Jun 11, 201