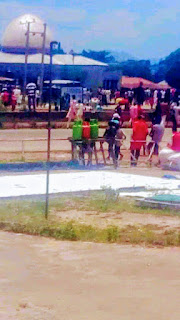 according to eyes yesterday there was tension as many lock their shops and many parents rush to bring their children home before the schools closing hours because of the clash between unknown youths.
Eye wetness also confirm that the clash is politically motivated as some people involved in the clash were from nearby Town. We also gather that some people sustain enjuries but as for dead we are yet to confirm
Currently normalcy has return as people are seeing carrying out their normal activities. But there is a heavy presence of security me around.